"Do not labour under the illusion that I am a bastion of moral goodness, Paige. That would be a dangerous endeavour."

Warden of the Mesarthim Family

Blood-consort of the Rephaim (formerly)

Residence of Magdalen, Sheol I (formerly)

Arcturus Mesarthim (pronounced: Ark-TOR-russ Mess-AR-tim), also known by his title of Warden, is Paige Mahoney's Rephaite keeper in Sheol I. He is Warden of the Mesarthim family and blood-consort to Nashira Sargas. Warden is one of "the scarred ones," or the Ranthen, the Rephaim who rebelled unsuccessfully against the Sargas family during Bone Season XVIII. Arcturus is an oneiromancer, a type of clairvoyant that can relive other people's memories.

Very little is known about Warden's past. He tells Paige that he was once a warrior. It can be assumed that he, like the other Rephaim, originally came from the Netherworld to Earth in 1859. Before the Waning of the Veils in 1859, Arcturus was mates with his oldest friend Terebell Sheratan, they are no longer mates but still friends. After the Mothallath and their supporters lost the war against the Sargas, Nashira chooses Warden as her blood-consort to proven that even Ranthen must conform to the new order. Without a choice in the matter, he spends the next two hundred years as her fiancée and war trophy.

With Terebell and several other Rephaim, they orchestrated an uprising of the clairvoyant human slaves during Bone Season XVIII. However, one of the humans betrayed them by telling Nashira about the plan in exchange for his freedom. All the humans were fed to the Emim, and the Rephaim involved, including Warden, were tortured by one of Nashira's poltergeists. The torture left painful scars on their bodies, giving them the name "the scarred ones."

Paige Mahoney first sees Arcturus during the oration for Bone Season XX, where he is waiting with several other Rephaim, including Nashira. When human tenants are chosen, Arcturus chooses Paige, the first time he has ever selected a human. She returns with him to the Residence of Magdalen, where he instructs her to call him by his ceremonial title of Warden.

Warden sacrifices his last dose of amaranth to bring Liss out of spirit shock.

After Paige and Warden save each other's lives three times each, the mysterious golden cord forms. They can use it to transmit images and emotions through the æther. Warden keeps a record of the daily events of the colony.

Paige and Warden finally give in to their feelings towards each other with a kiss moments before she is marched up to the stage for public execution.

He says farewell to Paige on the train station's platform, and tells her that if she ever sees him again, it will mean that there's danger.

Terebell tells Paige that during the revolt it became clear that the Ranthen would never reach Nashira and Gomeisa in their stronghold. So, Arcturus made for London to warn Paige of Nashira's continued hunt. Warden arrived in London on September 5, but has not been heard from since.

Warden is being held prisoner by the Rag and Bone Man in the Camden Catacombs. After he escapes, he supports Paige in her attempt to become Underqueen. Terebell orders Warden to train Paige for the scrimmage. He remarks to Paige that Terebell never specified the manner in which he was to train her. As a result, he turns the lesson into a dance, the closest thing to a formal romantic overture he has made to Paige thus far. He works with Paige to secure the Ranthen's patronage to fund a revolution against Scion.After winning the scrimmage, Paige names Warden as one of the high commanders of the Ranthen, and he is in charge of instruction.

Arcturus continues to work with Paige to transform the Unnatural Assembly into the Mime Order, which will be a revolutionary army against Scion and Nashira.

Warden and the other Ranthen begin searching for Adhara Sarin in the hopes of convincing her to form an alliance. Upon finding Adhara, Terebell allows Warden and Lucida to return to support Paige in Edinburgh.

When Paige's withdrawal symptoms ease, he tells her that he knows what it is like to crave a drug, as he must take amaranth for the pain from his scars. He tells Paige that all he had to offer Nashira was obedience and his dignity. In exchange for those, Nashira gave him and the other Ranthen small doses of amaranth. Of course, she made certain to withhold them from time to time. This is the reason why he always had to kneel in front of her.

Arcturus and Paige move to Paris, where they are granted a safehouse by the Domino Programme. Arcturus takes care of Paige while she recovers from her ilness and struggles with PTSD after being waterboarded. He assists Paige in her search for the clairvoyant sindicate in Paris. He is the one to find the followers of the missing Grand Duc, Le Vieux Orphelin, who call themselves les perdues. After learning of its location, he is also involved in the heist on Sheol II, where Paige was sent by Domino in order to kill Jaxon Hall, now the Grand Overseer of the colony. She, however, is incapable of shooting Jaxon and offers the possibility for Arcturus to kill him, which he doesn't take. While in Versailles, Arcturus obtains an opaline sword capable of severing Rephaite bones, therefore extremely useful in a fight. While escaping Versailles, Arcturus engages in a fight with other Rephaim, which weakens him. He is unable to stand, but Paige begs him to come along, confessing she still has feelings for him. After returning to the safehouse in Paris, Arcturus and Paige spend intimate moments together and reveal their feelings to each other. Since Arcturus' stock of amaranth has run dry, his scars begin to hinder him. While he is asleep, Paige leaves the safehouse and during her brief absence, the hideout is raided by Scion Vigiles. Arcturus is captured and taken to Nashira. Paige makes an attempt to rescue Warden, but when she gets to him, he disregards her and reveals that he has been a double spy all along, and that in reality he intends to reveal every piece of information he extracted from Paige to Nashira.

Devastated, Paige leaves and spreads the word of Arcturus' betrayal to the Mime Order and the Ranthen. Only after her final meeting with Cade, she realizes Arcturus has been possessed by a Dreamwalker.

Like all Rephaim, Warden is very tall and muscular, standing at 6"9' and has chartreuse eyes when he hasn't fed on aura. When he has fed, his eyes are a bright, arresting blue. His skin is a dark, honey gold and his hair is ash-brown in color. He has a strong jaw and bow shaped lips. Paige describes him as having "irises like flame behind stained glass." Warden's eyes are about the only thing that ever give away what he might be thinking or feeling. They are described as variations on fire and heat, and they dim and brighten depending on his state of mind. For example, they glow softly when he is content. Despite his large size and strength, Arcturus is quick and graceful enough to catch a butterfly in his hands. He bears painful scars from his torture at the hands of Nashira. Warden is usually dressed in a long-sleeved dark shirt, black trousers, and boots.

Arcturus is not like the other Rephaim. Most notably, he is the only one who does not seem to have prejudice against humans. He treats humans with respect and consideration, even the human slaves of Sheol I. Warden is never seen succumbing to violence or anger, but is a level-headed friend and confidant. Warden is particularly gifted at keeping his composure, making him inscrutable and enigmatic. He is a source of moral support for Paige, giving her strength, counsel, and solace. He is patient by nature. As an oniromancer, Warden can make a person dream vividly of the past by manipulating the memories in their dreamscape. Warden's dreamscape is dark, ashen, and completely featureless.

Arcturus is the brightest star in the northern celestial hemisphere. In biblical form, it means "a gathering together." It is part of the constellation Boötes, the Herdsman. The origin of Mesarthim is unknown, but it is the name of a triple star system. 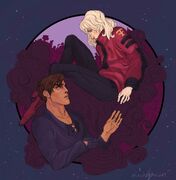 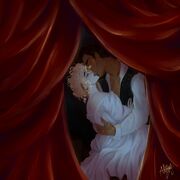