The Scion Citadel of London, also known as Scion-London, is the capital of Scion.

The administration of Scion-London in 2059 has made is unlawful for anyone to practice clairvoyant skills. Their official reason is that voyants are scammers and frauds. But they are deceiving the public because their real reason is that they fear that the powerful clairvoyants could take back the government for the people. Their law is unfair because the voyants have gifts that can help people. Due to their lies and deceit, an entire underworld of clairvoyants, known as the syndicate, has sprung up and represents a constant threat to the government. The seat of government is Westminster Archon.

Paige Mahoney describes London like this: "London - beautiful, immortal London - has never been a "city" in the simplest sense of the word. It was, and is, a living, breathing thing, a stone leviathan that harbors secrets underneath its scales. It guards them covetously, hiding them deep within its body; only the mad or the worthy can find time."[1]

The London syndicate is divided into sections, called Cohorts. There are six Cohorts, each ruled by a mime-lord or mime-queen. All syndies however are subject to the Underlord or Underqueen.

The Westminster Archon is the seat of the Scion empire. It is where clairvoyants are imprisoned and where government offices are located. Old Paul's is the highest building in SciLo and the seat of the Inquisitorial courts. Voyants are occasionally given televised sham trials there before they are sentenced to death. Birdcage Park is one of the few remaining green spaces in SciLo. It's fifty-seven acres of grass, trees, and winding flower beds located near I-1.

The Tower of London is the prison complex. The White Tower is the keep and heart of it. It's run by an elite security force called the Guard Extraordinary. They syndicate calls them Ravens. They're cruel, black-clad Vigiles with a limitless number of torture methods. There's also Traitor's Gate, a solemn black construction of with a latticed lunette, used as an entrance during the monarch days. It's build under a sweeping stone archway. Voyants are kept in the Blood Tower until they are sent to Sheol I.

I-5 is the financial center of Scion. It is also where Paige has lived since she was nine, until she left home at sixteen. The Bank of Scion England is on Threadneedle Street, the heart and soul of the financial district. A vast hologram of the anchor rotates above it. Scion monitors all the accounts for voyant activity. 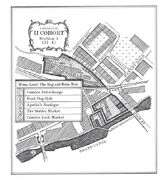 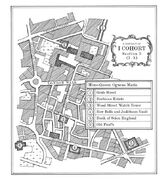