The Republic of Scion

Scion (pronounced: SIGH-on), officially The Republic of Scion, is the official name for a system of government that has been implemented throughout nine European countries. Its policies revolve around the control and punishment of so-called "unnatural" individuals, also known as clairvoyants. Although not all countries are under their control, influence and support for their anti-clairvoyant policies are spreading. Its symbol is the anchor.

In 1901 the Republic of England was founded by the Marquess of Salisbury after the fall of the monarchy, but the name "Scion" was not used until 1929. The First Grand Inquisitor, Ramsay MacDonald, was chosen and London became the first Scion citadel on 29 November.[1]

While it professes to be a republic, Scion is, unbeknownst to the rest of the globe, a puppet government for the Rephaim, who rule from the penal colony of Oxford. This secret relationship between Scion and the Rephaim is formally called a suzerainty. Countries are allowed some self-rule, but always report to the dominant entity, the Suzerain, currently that position is held by Nashira Sargas.

Countries under Scion rule are said to be "under the anchor," while countries threatened by it are "in the shadow of the anchor." Countries outside Scion's influence are known on the streets as the "free world."

Scion does not support religion because it is believed to be too close to clairvoyance. Churches and other religious buildings have been repurposed. Scion blacklists all literature about clairvoyance, fantasy, and the spirit world, and over the decades, it has held many book-burnings to destroy all such forbidden knowledge. It also blacklists movies, music, and other forms of entertainment and popular culture. The only newspaper approved by Scion is the Daily Descendant. Scion is thought to listen in to most communication, such as telephones. They also have security cameras everywhere. While they are blind to spiritual activity of any kind, they do note any suspicious behavior, which many clairvoyance abilities involve.

Scion has equality across genders because the Rephaim culture has no history of sexism. So, when Nashira came to Earth, it made no sense for her to create or maintain any form of misogyny in her empire. She worked to ensure that it was eradicated wherever possible. Certain Victorian men who met her and scoffed at the idea of being led by a woman did not meet happy ends.

All Scion countries have at least one citadel, which is styled as "the Scion Citadel of [Name]." The ruling citadel of Scion's empire is the Scion Citadel of London, England. Some countries which do not use the Scion system, mostly those which were part of the British Empire, have a small Scion presence via outposts and are considered part of its wider empire.

Scotland and Wales are no longer recognized as separate countries. The terms England and Britain are used almost interchangeably by Scion. The island is divided into eight regions, each with one citadel, which acts as its regional "capital," but all bow to the will of London. The surrounding areas are peppered with towns, villages, and conurbations, all under the yoke of Scion outposts.

There are several citadels of Scion throughout the world, further divided into cohorts by its urban division system: 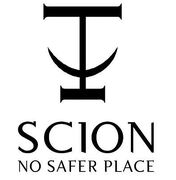 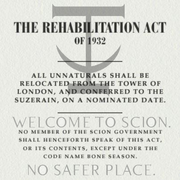