Nadine Leiko Arnett, also known as the Silent Bell, is a member of Jaxon Hall's clairvoyant gang, the Seven Seals. She is a whisperer, a type of sensor, and the younger half-sibling of Ezekiel Sáenz. She is a talented violinist.

Little is known of Nadine's life prior to joining the Seven Seals. She was born in Québec, Canada and later lived in Boston, Massachusetts. At some point her half-brother Zeke, a fellow clairvoyant, moved in with her. In April 2057, they travelled to the Scion Citadel of London on a college trip to find out more about the Scion system. After the pair were approached by Jaxon Hall, they elected to remain in the citadel to learn more about their clairvoyance. It is heavily implied that Jaxon used false promises to get Nadine and Zeke to stay in Seven Dials.

Nadine was seen in Paige Mahoney's flashbacks during her time in Sheol I. While Paige was missing, she served as Jaxon's temporary mollisher. Nadine, along with her gang, successfully infiltrate Sheol I to rescue Paige during the Bicentennial Ceremony. She is seen taking pot shots at emissaries with her pistol and fighting alongside Sheol I voyants and amaurotics against NVD officers who tried to stop them from leaving. She boards a train car with her brother, Jaxon, Paige, and the escaping prisoners back to London.

Nadine has been pushing to become Jaxon's mollisher since Paige went missing. She's been having private meetings with Jaxon, and he's let her do a lot of Paige's work. But he will never make Nadine mollisher unless Paige says there is no way she is ever coming back to the Seals. When Paige does come back as mollisher, Nadine is forced to return to Covent Garden busking with her violin. She is angry about this because it also means a cut in her pay.

After Paige leaves the black market, Nadine and Zeke remain to continue trying to sell their wares for Jaxon. Haymarket Hector and his gang arrive incredibly drunk. He starts asking Nadine and Zeke questions about the paintings they are selling. They argue with four different traders about whether the paintings are fakes. To please the traders, Hector confiscates the Champaign painting to have it examined. He also takes the rest of their wares. Nadine and Zeke try to stop them, but it is nine against two and they end up getting beaten up. Upon arriving back at the den, Nadine and Eliza Renton begin fighting about what happened. Paige hears and joins in the argument, while Zeke watches on nervously. In the midst of the fighting, Eliza reveals that Nadine is only in the Seals because of Zeke, and that Jaxon didn't want to hire her. Jaxon interrupts them and threatens to kick Eliza out of the Seals.

When Jaxon announces his intention to participate in the scrimmage, Nadine is immediately supportive.

After the scrimmage, Nadine and Zeke remain loyal to Jaxon.

Nadine and Zeke have been staying low in Seven Dials. However, Terebell Sheratan wants them gone because they are still loyal to Jaxon. Jaxon ends up helping them get out of London safely.

Nadine and Zeke travelled to France along with Jaxon who had betrayed them, selling them to the penal colony of Sheol II located in Versailles. They were later rescued by Paige who infiltrated Sheol II in an attempt to free all prisoners, most notably her former associates and a potential ally, Le Vieux Orphelin.

Nadine revealed to Paige that the reason for their rivalry was the fact that Nadine had been secretly saving up money to escape Scion. She also expressed her wish to continue on that path in order to share the word about Scion's true nature and the revolution in the free world.

After Warden was captured by Nashira Sargas, Paige arranged Zeke and Nadine's return to London in order to warn the Mime Order of Arcturus' supposed betrayal. Before leaving, Nadine and Zeke wished Paige good luck and acknowledged that they were now members of the Order.

Nadine is described as having dyed straight red hair, cut as if by a ruler. In Paige's last memory, Nadine has stopped dying her hair and it is dark brown and shorter. Paige noted the only similarities she shares with her half-brother are his eyes and restless features. She stands at 5”6’ with a reasonably slim build, naturally dark brown hair and amber-brown eyes. She is of mixed race: her father is black and her mother, whom she shares with Zeke, is mixed Hispanic and East Asian.[2] Upon returning from Sheol I, Paige notes that she has cut her hair so it just covers her ears.

Nadine is prickly and angry. She's rude and doesn't seem to display much empathy or understanding towards others. She is mistrustful. 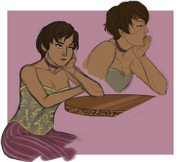